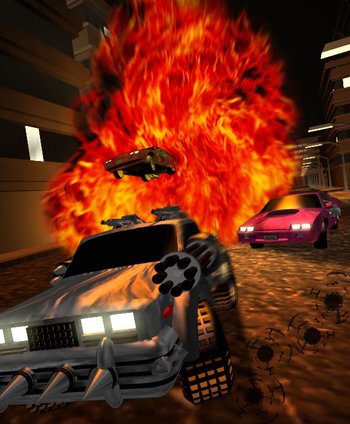 Death on the fast lane
"The race is on, in Death Rally, where life is short & hot, fast & deadly. Watch the road, hear the rumble. Start out easy, get the feel of it. But remember: by the rules or fry the rules, play to win. 'Nuff said. Now ride your machine, your motor-war-chariot."
— True Tom Rhymer
Advertisement:

Death Rally is a Driving Game developed by Finnish studio Remedy Entertainment and published by Apogee Software in 1996. It was one of the last titles to be published under the Apogee name.

The actual races use the classic top-down viewpoint; if you've played the Micro Machines games, you'll know what to expect. The cars are sprites but some elements of the track are in 3D. The player can drive under street lamps and signs, see parallax on rock formations and buildings and drive through tunnels.

The game can be played with or without weapons (although weapons make things much more interesting) and the player can even run over the bystanders on the side of the track, although it shouldn't be done intentionally as it slows the player down and damages their car.

The original game supports up to 4 players over an IPX network, along with two-player modem and serial-link multiplayer which was standard at the time of development.

In October 2009, Remedy released the game as freeware, and also ported it to run on modern Windows operating systems without the need for DOSBox emulation. If the player wants to play multiplayer, they have to use the DOS version and make use of DOSBox's IPX over TCP/IP emulation. The freeware release can be downloaded from Mod DB

A reboot of the game was later created, first for mobile consoles, then for PC.

Get ready to go!