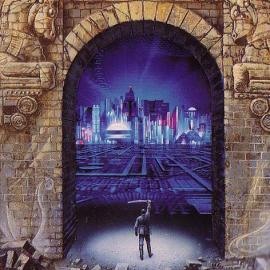 Until a man is twenty-five, he still thinks, every so often, that under the right circumstances he could be the baddest motherfucker in the world... Hiro used to feel this way, too, but then he ran into Raven. In a way, this was liberating. He no longer has to worry about being the baddest motherfucker in the world. The position is taken.
Advertisement:

Possibly the best-known book by Neal Stephenson, Snow Crash is the tale of a sword-slinging hacker who teams up with an extreme skateboarder in a Post Cyber Punk disincorporated USA to fight "Snow Crash" - a computer virus for the brain. Oh, and there's a badass biker with glass knives and a nuclear bomb strapped to his motorbike, too.

Apart from its frenetic action sequences and overt use of the Rule of Cool, the book is surprisingly deep, with a substantial portion of the plot given over to exploring metaphysical interpretations of the Tower of Babel myth. Typical for a Stephenson novel, the plot juxtaposes action sequences, lengthy humorous digressions, and extremely detailed Infodumps seemingly at random.

The book is also notable for its uncanny prediction of future trends. Memes play an important role in the plot, which was written years before the public became aware of the concept through Internet memes. While holographic web terminals have not yet come to pass, we do have heavily populated 3D virtual worlds, satellite photograph software, and a massive user-created online library. Certain real world equivalents (Second Life, Google Earth) have been inspired by the book itself.

was in development for their exclusive streaming service.

This book is the Trope Namer of:

This book also provides examples of: