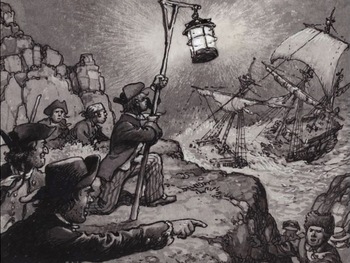 Cornish wreckers at work.
Capt. Malcolm Reynolds: You know anything that's worth anything's really right here in this cargo bay. So you take a look around, decide what you think is fair.
Other captain: Already have. [gutshots Mal] We're taking your ship.
— "Out of Gas", Firefly
Advertisement:

Our heroes are adrift and need of rescue. Maybe they're adrift in a lifeboat in the middle of the ocean. Maybe they are in an escape pod or a damaged starship floating in the vastness of space. Maybe their airplane or spaceship crashed in a desert, or a jungle, or onto an uncharted island or planet. They need rescue.

And rescue arrives! Or so it seems. Actually, the first people to show up are more interested in stealing their stuff and looting their bodies than they are in actually rescuing anyone. Survivors just jeopardize the salvage value of whatever bits of Phlebotinum are left over. Our heroes either have to fight them, or escape from them, or turn the tables and steal their ship instead.

Very much a part of many Robinsonade plots. Probably the reason is that the "surviving with ingenuity on a desert island" part of the story eventually gets boring, and to have a dramatic climax before the final rescuing there is nothing better than to throw in a fight with Pirates for no other reason than the Rule of Cool.