Film / The Cars That Ate Paris 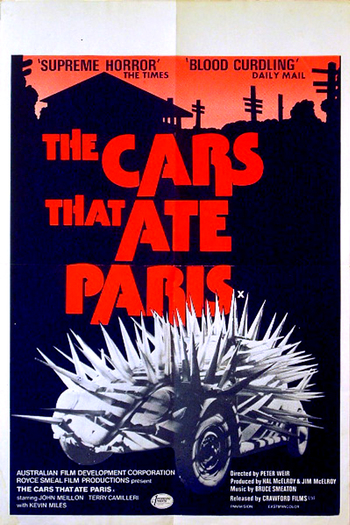 The Cars That Ate Paris (also known as The Cars That Eat People) is a 1974 Australian New Wave film that marked the directorial debut of Peter Weir.

The Paris of the title is a tiny town in the New South Wales countryside. It's surrounded by treacherous roads that are prone to car accidents. The Waldo brothers become a victim of one of these accidents. George dies, but Arthur (Terry Camilleri) survives. After recovering in the local hospital, he's persuaded to stay in town by Mayor Kelly (John Meillon). But it becomes apparent that beneath the placid exterior of Paris lies a harsh truth: the car accidents are caused intentionally by the town's residents, and they make their livings by scavenging the parts.

The Tropes that Ate Paris: