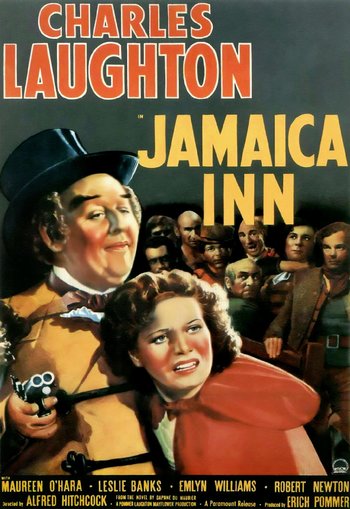 A 1936 novel written by Daphne du Maurier, Jamaica Inn tells the story of young Mary Yellan, who was brought up on a farm in Helford but had to go and live with her Aunt Patience after her mother died. Patience's husband, Joss Merlyn, a terrifying bully who is almost seven feet tall, is the keeper of Jamaica Inn, a remote public house on Bodmin Moor.

On arriving at the gloomy and threatening inn, Mary finds her aunt in a ghost-like state under the thumb of the vicious Joss, and soon realizes that something unusual is afoot at the inn, which has no guests and is never open to the public. The plot follows a group of murderous wreckers who run ships aground, kill the sailors and steal the loot. It is an eerie period piece set in Cornwall in 1820; the real Jamaica Inn still exists and located in the small village of Bolventor, just off the A30 as it passes across Bodmin Moor (said road actually ran right through the village before the bypass was built in the 1980s).

Made into a 1939 film directed by Alfred Hitchcock, starring Charles Laughton and (in her first starring role) Maureen O'Hara. Later made into two Mini Series; one in 1983 at ITV starring Jane Seymour, Patrick McGoohan and Billie Whitelaw, and another in 2014 at BBC1 starring Jessica Brown Findlay.