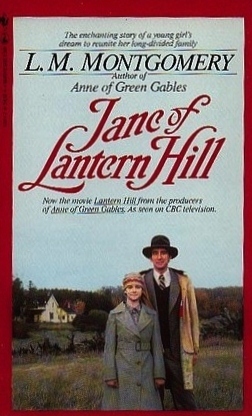 Jane of Lantern Hill is L. M. Montgomery's last novel. Jane Stuart lives with her mother and wealthy grandmother in the city of Toronto. She is miserable under her grandmother's tyrannical rule, all of her talents smothered and any friendships snuffed out. Nonetheless, Jane dreams of happiness for herself and her beautiful but spineless mother Robin.

Having always been told he was dead, it comes as a great surprise to Jane to learn that her father Andrew Stuart is actually alive and well and living in Prince Edward Island — and he wants to meet her. Reluctant, sure she's going to hate the Island and hate her father and hate everything about it, Jane sets out — but as soon as she arrives, it turns out that she and her father are true kindred spirits, and Jane's summers on PEI become a seemingly unlimited opportunity for personal growth, wonder, and joy.

This is a little odd among Montgomery's books, not only for being at least partially set away from PEI, but for striking a tone somewhere between the whimsical coming of age of Anne of Green Gables, et alia, and the poignant, sometimes desperate need for love and beauty in the lonely, adult The Blue Castle.