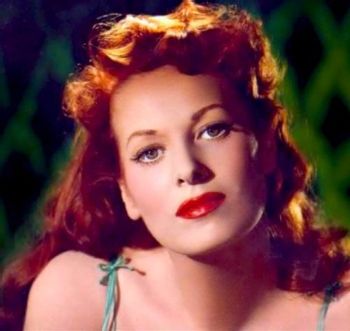 Maureen O'Hara, born Maureen FitzSimons (17 August 1920 – 24 October 2015), was an Irish actress and probably the most famous Fiery Redhead leading lady in film history. She was (more or less) "discovered" by Charles Laughton, who gave her an important part in Jamaica Inn and her first starring role as Esmeralda in 1939's The Hunchback of Notre Dame.

With her flaming red hair and deep green eyes, O'Hara — called at one time "The Queen of Technicolor" — is considered one of the greatest beauties of The Golden Age of Hollywood. She was so popular that many around the world began to link red hair and green eyes with Irish people. She was also one of Hollywood's earliest Action Girls, donning Pirate Girl garb and seizing a sword, or sporting the flimsiest of veils in Hollywood's best "Arabian Nights" Days style, to appear as the strong-willed heroine of quite a few Swashbucklers.

O'Hara was a long time friend and collaborator with the legendary John Wayne. The two appeared in five movies together: Rio Grande, The Quiet Man, The Wings of Eagles, McLintock! and Big Jake. Like Wayne, she worked extensively with iconic director John Ford, although they later grew to loathe each other.

In 2014, she was slated to win a Lifetime Achievement Academy Award at the Governor's Awards Show function. Maureen passed away on October 24, 2015 at the age of 95.

Some notable films Maureen O'Hara appeared in include: