Literature / You Be the Jury 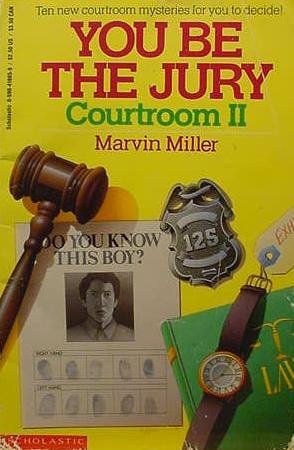 You Be the Jury is a series of Mystery Fiction juvenile books, consisting of five volumes published from 1987 to 1996 with two compilations published in 1999 and 2000. Written by Marvin Miller, these also count as Gamebooks but they owe more to Encyclopedia Brown than Choose Your Own Adventure-style books. Unlike Encyclopedia Brown, these books had you as a juror instead of a detective.

Each book had ten mysteries and followed the same format. You'd be introduced by having explained the brief aspects of law or legal proceedings (such as kidnapping, last wills, fraud and so on) as it related to the case. You were given a brief overview of the case and then both sides would tell their story. You were also given three illustrated clues labelled exhibits A, B and C to check over in conjunction with the testimony and facts of the case. Then you were given the question of guilty or not guilty, with the solutionbeing included. As with much mystery fiction aimed at children, it boiled down to whoever lied or revealed information they shouldn't have known as being guilty.

The same publisher also released one book of the similar You Be the Detective which were slightly more interactive, with each case including a scrambled picture the reader was supposed to cut out and put together to help solve the mystery.

You Be the Jury provides examples of: