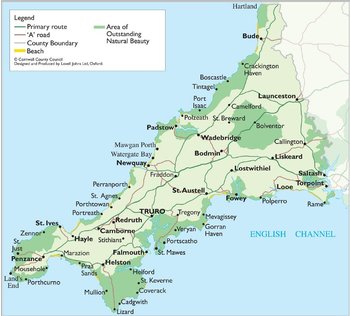 Onen hag oll note  One and all in Cornish
Advertisement:

I'll do it dreckly me 'andsome.

Ahh, Cornwall. Or Kernow in Cornish. A small county at the south-western tip of The West Country, but also so much more than that.

With its only land border consisting mainly of a river (the Tamar), Cornwall's boundaries have remained unchanged for over a thousand years. It has a distinctly Celtic heritage, making it closer to Wales and Brittany (which has a sub-division called Cornouaille) in historical and cultural terms than the rest of England.

, a long-standing rivalry with Devon, farmers driving tractors on main roads, the Beast of Bodmin Moor, surfing, its own language

that went extinct around 1777 but is currently undergoing a revival

, mining, fishing, farming, Cornish pasties and a dialect that is nigh-indeciperable to anyone from 'up country', otherwise known as England. Large stretches of the coastline, as well as Bodmin Moor, are protected as Areas of Outstanding Natural Beauty.

With tin mining gone, fishing in decline and farming on wobbly territory, Cornwall thrives mostly on tourism and tourists, known locally as "emmets"

note  this word can also be used to refer to "incomers" - people who live in Cornwall but weren't born there; even incomers who've lived there for years never get classed as being proper Cornish. In fact, Cornwall is one of only four areas in the UK eligible for EU 'Objective One' funding: money given to poverty-stricken areas note Defined as being below 70% of the European GDP.. Ironically, in the June 23 2016 Brexit referendum, Cornwall voted to leave the EU by 56.5%, but then got desperate to keep the funding.

Cornwall has its own flag

, the Cross of St Piran (white cross on a black background). It's widely flown west of the Tamar and is available on badges, bumper stickers, etc. From around 2002 onwards, knowledge of this elsewhere has led to most other English counties adopting or promoting their own flags.

Cornwall has an ongoing rivalry with Devon, its neighbour across the Tamar and the only other county with which it shares a border. To outsiders (especially those not from the rest of the UK), the whole "cream or jam first" debate may seem tame, but this is serious stuff note  this relates to the West Country delicacy that is the cream tea; in Cornwall, they spread jam on the scone first, to the point where "jam first" has to all intents and purposes become an unofficial motto of Cornwall, while in Devon it's cream first. Both sides insist that their way is best and the other lot are wrong. Actual scientists have conducted detailed studies on which is the most effective method. Only in Britain. To add fuel to the fire, a few years ago historians claimed to have found evidence of pasties being made in Devon mining villages before the earliest known making of them in Cornwall, to the indignation of the Cornish who claimed that this was cultural appropriation note  Tin was mined in western Devon as well as Cornwall; pasties were popular with working people (especially miners) because they stay warm for several hours and form a complete meal that can be carried easily and eaten without cutlery. Since 2011, the Cornish pasty actually has Protected Geographic Indication (PGI) status; if it's not made in Cornwall, you can't call it a Cornish pasty. The trade organisation which defines what a Cornish pasty is is the Cornish Pasty Association, sometimes humourously (or perhaps semi-seriously) referred to as the "pasty police".

Cornish nationalists, relatively few in number and limited in actual political support, are fanatically proud of their Celtic heritage. Some of the more extreme nationalists occasionally burn down holiday homes, like their brethren in Wales, while the very concept of Cornish nationalism tends to be regarded as absolutely ridiculous (and hilarious) by anyone not from Cornwall. In any event, nationalists will insist Cornwall is a separate country or constituent - with England but not of it. Largely because it should be. Who says Wales gets all the fun?

Famous people from (or strongly associated with) Cornwall include the following:

Media based in Cornwall: