Film / The Plague of the Zombies 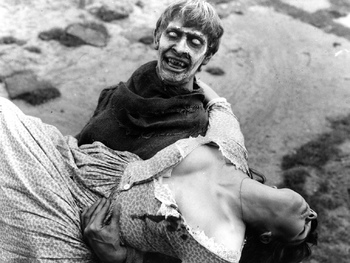 A Hammer Horror film from 1966, directed by John Gilling.

Mysterious deaths are happening around a small village in Cornwall. Local physician Dr. Peter Thompson (Brook Williams) writes a letter about this to his mentor, Sir James Forbes (André Morell). Dr. Thompson's wife Alice (Jacqueline Pearce) happens to be a friend of Sir James's daughter Sylvia (Diane Clare), and she convinces them to pay a visit. After they arrive, they uncover a plot involving the use of zombified people as labor for a closed tin mine.