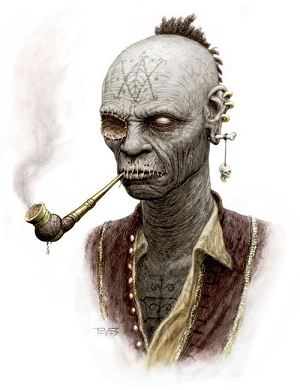 The original zombie before it was cool.

The concept and word zombi originated in Voudoun beliefs in Haiti, though the etymological roots date back to West Africa. It referred to those enslaved by sorcerers (who were known as bokors) who have not allowed them a peaceful death or have put them in trances to make them think they are dead.

Can be interpreted as a Primal Fear for enslaved people — the enslaver who has taken everything from you even finding a way to deny you the freedom of death and continue exploiting you forever.

Zombies based on this ancient tradition are typically slaves to a necromancer or other Evil Sorcerer. If living, they have been Brainwashed using drugs and/or More than Mind Control. If undead, they have been reanimated with blood, evil, or some other form of unholy magic. As such, they may be vulnerable to Revive Kills Zombie. In either case, one can easily see zombies of this breed as a Woobie Species for obvious reasons. Salt, of all things, can often break the spell, freeing the living and allowing the dead to rest...or to go after their master in a vengeful rage.

If these zombies break their control or their master is killed, they may become Flesh Eating Zombies in more recent works.

In zombie-related horror, the idea of a zombie slave has been largely replaced by masterless monsters out to kill and eat the living, as introduced by George A. Romero in Night of the Living Dead. However, Voodoo Zombies still show up a lot in fantasy—and in horror about Black Magic instead of a Zombie Apocalypse—as a villainous necromancer's standard mooks, albeit often revived through other varieties of The Dark Arts besides Hollywood Voodoo. Related is the concept of undead villains like liches, mummies, and vampires reanimating other dead people (often including their victims) as minions; such minions are often referred to as ghouls if a vampire reanimated them.