Music / Love It to Death 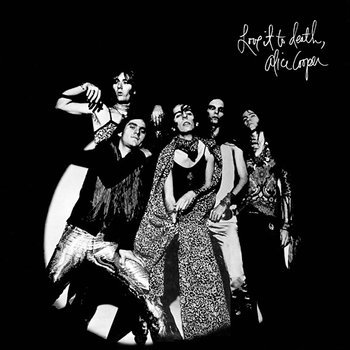 Have you got the time to find out who I really am?
Advertisement:

Love It to Death is the third album by Alice Cooper, released in 1971. At this point Alice Cooper was a band led by the singer Vincent Furnier, who would later legally change his name to Alice Cooper. The album was initially released on Straight Records, a label run by Frank Zappa. The band here are at a nexus of rock subgenres. Some of the music has echoes of the psychedelic era, while it's also a glam rock album contemporary with releases by Marc Bolan, David Bowie, and the New York Dolls. It is also, of course, a foundational influence on metal, especially theatrical artists like Kiss and Mötley Crüe. Sales were driven by the hit single "I'm Eighteen".