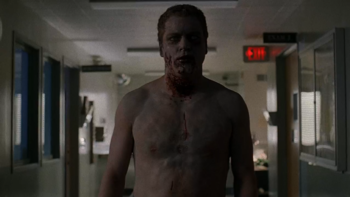 "I am he that liveth and was dead; and, behold, I am alive for evermore, amen; And have the keys of hell and of death."
— Relevation 1:18
Written by Vince Gilligan & Frank Spotnitz
Directed by Thomas J. Wright
Mulder: The Four Horsemen of the Apocalypse. These four men bring with them war, pestilence, famine and death.
Frank: So that all the dead of the earth will arise - Armageddon. It must begin with the dawn of the millennium... or not at all. That's what they believe. The man you're looking for - your necromancer - he exhumed these men in accordance with their wishes.
Advertisement:

As the year 2000 approaches, the agents seek out ex Millennium Group member Frank Black (Lance Henriksen) when some of his former associates turn into the walking dead.

Mulder: The world didn't end.
Scully: No, it didn't.