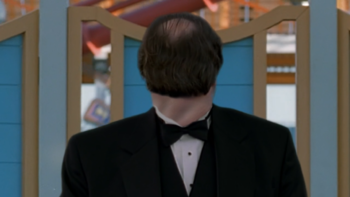 Looking the other way... is that just a trick, or the theme of the episode itself? If you're asking us, who knows?
Written by Vince Gilligan, John Shiban & Frank Spotnitz
Directed by Thomas J. Wright
"Know that the Amazing Maleeni was alive one moment and expired the next. Know also that no one saw his fleeing attacker nor heard the dying man's cries."
— Fox Mulder
Advertisement:

A small-time stage magician does a trick where his head rotates 360 degrees, and is found dead shortly afterwards, with his head completely separated from his body. Mulder and Scully investigate.

"The great ones always know when to leave the stage."
Feedback