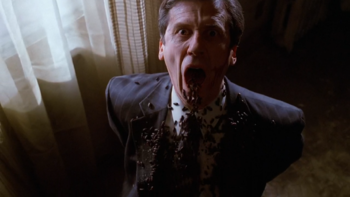 "His airways have more or less just been reamed out."
Written by Steven Maeda & Greg Walker
Directed by Kim Manners
Skinner: A form of what - "super tobacco"?
Scully: Which possibly could have created super bugs. I guess the real question is: could they have become dangerous to humans?
Advertisement:

Skinner leads an investigation of a cigarette company who are covering up someone (Tobin Bell) who is mysteriously killing people and leaving hundreds of special tobacco beetles in his wake.

"Well, they say the addiction is stronger than heroin."