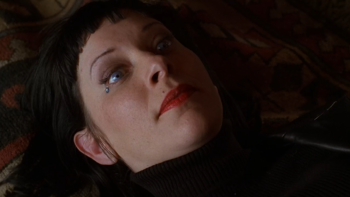 "The only thing you people are cursed with is stupidity. All of you. Everybody. Mankind."
Written and directed by Vince Gilligan
"Jenn": So, finally, feeling very intelligent I spoke up and I said "Je souhaite un grand pouvoir et une longue vie". "I wish for great power and long life".
Mulder: And thus became a jinni yourself.
Advertisement:

Mulder and Scully investigate what happened to a man whose mouth suddenly disappeared from his face. They discover a cynical, word-twisting genie is involved, with three wishes being given to anyone seeking to change their fortunes.

Mulder: I don't know if you noticed but, um, I never made the world a happier place.
Scully: Well, I'm fairly happy. That's something.
Feedback

Example of:
See the Invisible