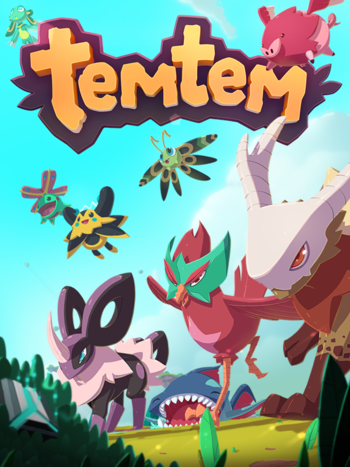 This journey will challenge us! We'll struggle to find and beat them all!
— "Temtem Up!"

Temtem (stylized temtem) is a massively multiplayer creature collection game by Spanish developer Crema. Its Early Access was released on January 21, 2020 following a November 2018 closed alpha with the full version being released on September 6, 2022. The Kickstarter achieved its goals in under 48 hours. The developers themselves on their YouTube trailer

refer to it as inspired by Pokémon, and mechanically it is extremely similar, featuring aspects such as level-based multi-phase evolution, limited move sets, battling and capturing wild temtems in the grass, and more.

Where it differs, however, begins with the fact that it is massively multiplayer — a realm that creature collection games in general seldom tread. Other noteworthy differences currently seem to be a competitive wishlist, including a Nuzlocke mode, having purely predictable damage calculations, an expedited breeding system, a competitive banning system to counter overuse, and more.