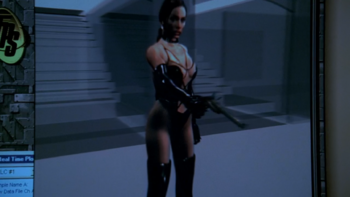 "You say that you have no knowledge of Ivan Martinez or a company known as First Person Shooter or F.P.S.?"
Written by William Gibson & Tom Maddox
Directed by Chris Carter
Mulder: Well, testosterone frenzy or no, the only suspect we have in this man's murder is a woman.
Scully: Yeah, I've seen it. A computer-animated woman, Mulder, with a computer-animated weapon.
Mulder: A flintlock pistol - which would leave a very large entry wound.
Scully: Pictures don't kill people, Mulder, guns kill people.
Mulder: As do swords.
Advertisement:

Mulder and Scully investigate when a virtual reality shooter becomes deadly to its players.

"Born in anarchy with an unquenchable bloodthirst, we shudder to think what might rise up from the darkness."