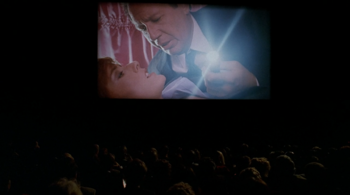 And now, our Feature Presentation of The X-Files movie, with... Garry Shandling... and Téa Leoni. Well, we got the naming right, unlike that Morris Fletcher debacle...
Written and directed by David Duchovny
Skinner: This is Wayne Federman. He's an old buddy of mine from college. He's a writer out in Hollywood now and he's working on an FBI-based movie. He's asked me to give him access.
Scully: A screenwriter?
Wayne: It's actually... It's a writer-slash-producer.
Mulder: Well, that's actually just a hindrance-slash-pain in the neck.
Advertisement:

A movie producer who has an in with AD Skinner decides to make a movie about the X-Files.

"I think the dead are beyond caring what people think about them. Hopefully we can adopt the same attitude."
Feedback

Mulder, Scully, and Skinner have a three-way phone conversation while each of them is taking a bubble bath in their hotel room.

Mulder, Scully, and Skinner have a three-way phone conversation while each of them is taking a bubble bath in their hotel room.