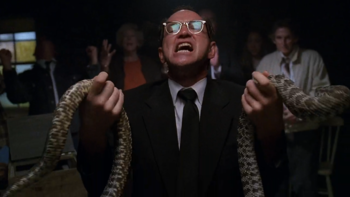 "Before Jared joined us, he belonged to a fundamentalist congregation outside of town - the Church of God with Signs and Wonders. It practices snake handling."
Written by Jeffrey Bell
Directed by Kim Manners
Reverend Mackey: They found that a rigid interpretation of the Bible was not for them, especially when it involves risking life and limb in the act of worship, but again it is not for me to judge. I will say, however, that both Jared and Gracie were persecuted by the members of their former church. All this animus... stems from their church leader - Enoch O'Connor.
Scully: Animus enough to motivate a murder?
Advertisement:

Following a murder by snakebite, suspicion falls on Reverend Enoch O'Connor, pastor of a fringe church that uses snake-handling in its rituals.

Advertisement:
"I look forward to seeing you on Sunday."