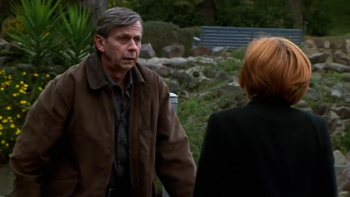 The most unusual partnership you'll ever see in The X-Files.
Written by William B. Davis
Directed by Rob Bowman
"I have access, Agent Scully. I have these miraculous chips, but the genetic research that makes them work is closely guarded. There are men in this building who would kill me if they knew what I'd offered you. They'd kill you, too, in the blink of an eye."
— Cigarette Smoking Man
Advertisement:

The Cigarette Smoking Man persuades Scully to join him on a trip to retrieve extraterrestrial technology that can be used to cure all human diseases.

"You may be right... but for a moment, I saw something else in him. A longing for something more than power. Maybe for something he could never have."