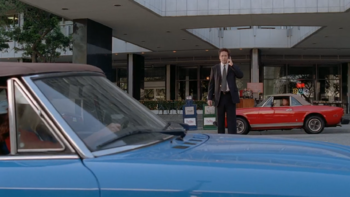 "She follows me around trying to ruin my life. I'm not going to let her ruin it this time. It's either me or her. I don't want to leave Kansas."
Written by Chris Carter
Directed by Paul Shapiro
"Our doppelganger who lived, until yesterday, in a pink house on Moreton Bay Street. But she's not a manifestation, Mulder, she's real, and so is the path of destruction that she's left in her wake."
— Dana Scully
Advertisement:

Mulder and Scully investigate a pair of women who look identical and cause mayhem to break out whenever they're near each other.

"If four should meet, the result is... well, suffice to say it's better just to avoid these encounters altogether and at all costs."
Feedback

Bob Damfuse is an angry man whose voice knows no limits, much to the passive consternation of Scully.

Example of:
NO INDOOR VOICE

Bob Damfuse is an angry man whose voice knows no limits, much to the passive consternation of Scully.