The X-Files is a science fiction drama created by Chris Carter, revolving around two FBI agents, a believer and a sceptic, working together to investigate unsolved paranormal cases and confidential signs of alien life. The show ran on Fox from 1993 to 2002, and then in 2016 and 2018.

Unmarked spoilers are present throughout the subpages as well as some of the synopsises below. Read at your own risk. Episodes marked by a double-dagger (‡) pertain to the alien Myth Arc of the series. 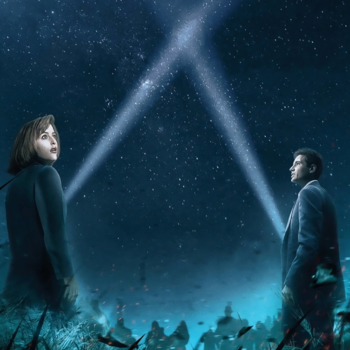 "Mulder, the truth is out there. But so are lies."
Blevins: The reason you're here, Agent Scully, is we want you to assist Mulder on these X-Files. You will write field reports on your activites, along with your observations on the validity of the work.
Scully: Am I to understand that you want me to debunk the X-Files project, sir?

The FBI assigns Agent Dana Scully to work with a fellow agent and conspiracy theorist, Fox Mulder. He solves what is called the X-Files, ignored mysteries whose answers mostly defy any kind of scientific explanation. The two get along somewhat swimmingly, as they hunt for what lies beyond the unknown. Whether it's humans with untold abilities, supernatural phenomena... and the first possible pieces of evidence about extraterrestrial beings, something that higher-ups refuse to disclose through any means possible, legal or not. 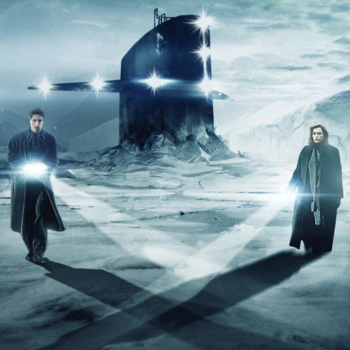 "You're becoming a player."
"Closing the X-Files, separating you and Scully was only the beginning. The truth is still out there, but it’s never been more dangerous."
— X

Ever since Mulder and Scully's discovery of a top-secret alien fetus and the death of a close government informant, the X-Files have been shut down, leaving the two in different jobs. With Mulder as a meager telephone tapper and Scully teaching at Quantico's FBI academy, the two do their best to continue their hunt for the hidden truth. However, their journey becomes increasingly fraught with deadlier monsters, morally ambiguous foes, as well as their own growing paranoia. And in the shadows, the machinations of an elderly chain-smoker lurk over the two, whose power matches his grasp on the reality of extraterrestrials. 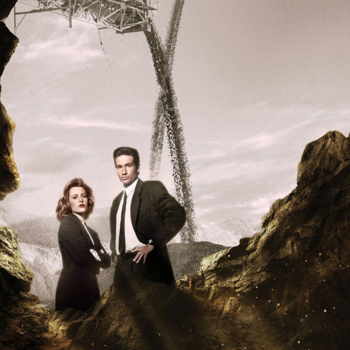 "This is bigger than me, you, or the F.B.I., Agent Mulder."
"We hear them everyday, they talk to us, they haunt us, they beg us for meaning. Conscience... it's just the voices of the dead.. trying to save us from our own damnation."
— General Christopher Johansen

Already in possession of potentially groundbreaking information, Mulder and Scully find themselves hunted by not only the government, but also the Cigarette Smoking Man and his sinister, anonymous group. This leads the two to certain moments in human history that may carry more startling truths behind experimentation on humans... or aliens. With their losses rising, and their lives being in more danger than before, the F.B.I. agents must be wary of who they can trust, and the glimmers of salvation they find, dead or alive. 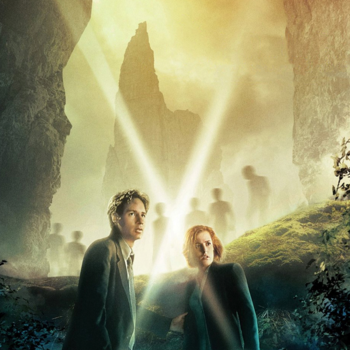 "The truth will save you, Scully. I think it'll save both of us."
"It's like your world will be okay as long as you can believe in, like, flying saucers. But I'm telling you the God's honest truth. I can see you're not as open-minded as you think you are."
— John Lee Roche

Hot on the heels of evading a bounty hunter sent to kill a mysterious healer, Mulder and Scully remain resolute in their search for the Syndicate's bigger picture, whether it's virus-infected bees, mysterious experiments from Russian camps or unexplained plane incidents. However, Mulder's faith in the extraterrestrial becomes questioned at every turn, complicating some of the cases he embarks on and endangering anyone close to him. Things get worse when a cancer diagnosis comes into the fray, along with a final revelation potentially bringing life-threatening consequences... 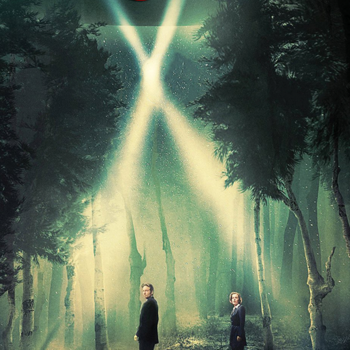 "Now with what I've heard, my beliefs seem more and more improbable."
Scully: Your memories were all that you had.
Mulder: I don't trust those memories now.
Scully: Well, whether you trust them or not, they've led you here. And me.

Mulder cannot believe in aliens anymore. Scully doesn't have long to live due to her cancer. Yet the two must not only find a concrete cure, but also expose the actions of the Syndicate, who will do anything to maintain the false normality of the world. Because of this, they must watch their step at every case they open up, ringing true in the face of people holding the power of nature in their hands, faceless pyromaniacs, and abductions of special children. Failure to do so could mean that everything Mulder and Scully have worked for goes up in flames.

Movie 1 (The X-Files: Fight the Future) 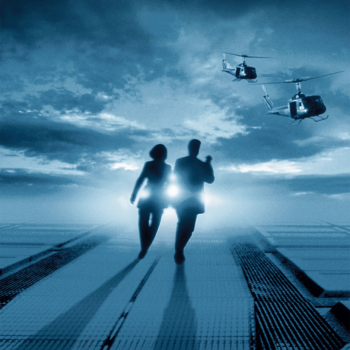 "If I quit now, they win."
Kurtzweil: They blew that building to hide something, maybe even something they couldn't predict.
Mulder: You're telling me they blew up that entire building just to hide the bodies of those firemen.
Kurtzweil: And one little boy.

Mulder and Scully have once again lost the X-Files, due to their office being reduced to ash by the Cigarette-Smoking Man. But their investigations have not ended yet, after a Dallas federal building bombing brings the two FBI agents to the discovery that it was a cover-up for something bigger. Namely, that the Syndicate is continuing their work on a vaccine to combat a sentient black liquid. When their continued pursuit for answers puts Scully's job and life at risk, Mulder must not only save her from any threat that needs her for their expanding plans, but also consider if the truth is worth fighting for. 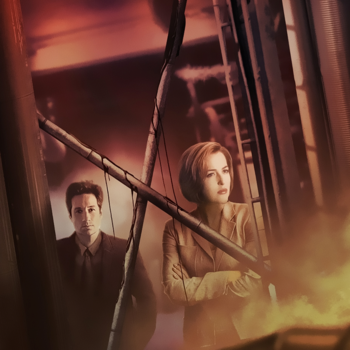 "It means the future is here, and all bets are off."
"Mulder, we are supposed to be doing background checks, not chasing X-Files."
— Dana Scully

After braving the Arctic winds to save an infected Scully and witnessing undeniable proof of aliens, Mulder's plans to take back his position in the X-Files fall on deaf ears. The duo are instead reassigned to a new boss, while rival agent, Jeffrey Spender, and Mulder's old flame, Diana Fowley, are at the X-Files' helm. Despite this change in profession, Mulder and Scully still do their best to stop supernatural threats harming the innocent, while the Syndicate's ever-growing collaborations with the extraterrestrial comes to a shocking end. But as one chapter closes, another will open that will forever change the fabric of religion, science, humanity... and sanity. 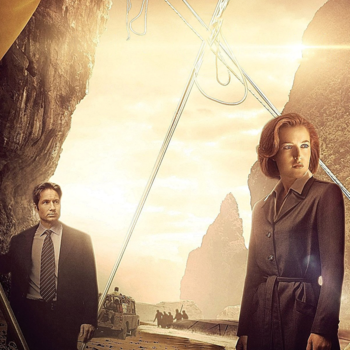 "You've suffered enough - for the X-Files, for your partner, for the world."
Mulder: I have this... powerful feeling and I can't explain it, but that... this is the end of the road. That I've been brought here to learn the truth.
Scully: Are you ready for it?

An unknown, submerged alien spaceship leads to many changes to Mulder's and Scully's life. The former has become comatose, due to untapped extra-sensory potential that makes him a target for the Cigarette-Smoking Man. The ensuing meeting eventually leads Mulder to resolve longstanding family issues. The latter, however, has her scientific mindset challenged by the ship's encrypted information, driving Scully to discover what she wants now and for the rest of her life. But the FBI agents' new victories and solved cases cannot last long, as the case that brought them together resurfaces... to do the exact opposite. 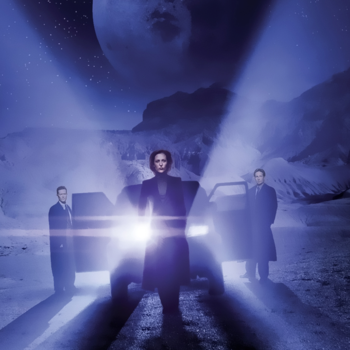 "This isn't about the X-Files, Scully. It is only about you."
Scully: You say you want to find Mulder but you won't do what it takes. You're afraid that I'm right.
Doggett: I'm not afraid of anything. Except that maybe Mulder's got even you believing in this crap now.

Aliens have abducted Mulder for their own experiments, leading the entire FBI to try and find him alive. But with the X-Files having one less person, a new agent takes the abductee's place: John Doggett, a former New York cop who couldn't care less about the extramundane. Through a gradual building of trust with the new recruit, Scully begins to broaden her scientific mindset and embrace Mulder's ideology, while hiding her new surprise arrival. But eventually, a search must have an end, and everything will not remain the same as it was. 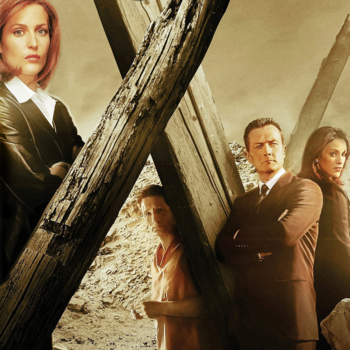 "For the truest truths are what hold us together, or keep us painfully, desperately apart."
"The conspiracy to keep the truth about aliens from the American public, all but destroyed a few years ago, has given rise to a new conspiracy in the government, now by men who are alien themselves."
— "Daniel Miller"

Doggett and his friend, Monica Reyes, have now become the new keepers of the X-Files, while Scully has gone back to being a FBI academy teacher. But for Mulder, he has unexpectedly gone into the shadows once more, due to the lingering threat of the Super Soldiers, human look-alikes with untold levels of invincibility. Their presence leads to unexpected displays of supernatural power from Scully's "miracle child", William. As a result, Scully must do whatever it takes to protect her son, while holding out hope for Mulder's return... even if such a miracle may prove devastating to her and everyone she holds dear.

Movie 2 (The X-Files: I Want to Believe) 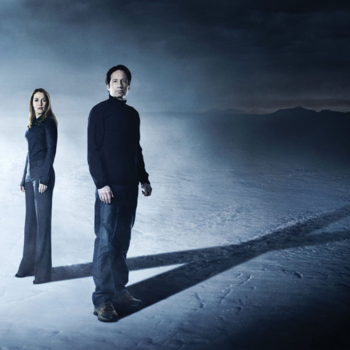 "Don't give up."
Scully: I know you know this, but after 72 hours, there's a slim chance that she's still alive.
Whitney: We have some reason to believe she is. But so far we've got no evidence to the contrary and the facts give us hope.

Six years have passed when Mulder and Scully chose to become fugitives from the law. Now, Scully has taken up neurosurgery at a Catholic hospital, where a terminally ill boy has her interest. Mulder, however, is still longing for the truth that has repeatedly eluded him. Their vastly different lifestyles change when the FBI asks the two for their help in locating kidnapped women, one of whom is an FBI agent. They develop mixed opinions regarding their only lead: a convicted priest claiming to have psychic visions of the crime. But they must eventually band together to determine the ones who did the deed, who have something horrific in mind for them... 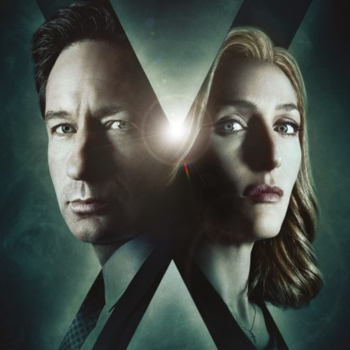 The truth is still out there.
"What if everything we've been led to believe in is a lie? What if there is no alien conspiracy?"
— Fox Mulder

Mulder and Scully have gone their separate ways after closing an illegal organ donor case eight years ago. They reunite when a talk show host arrives to reveal potentially devastating information that will rock both sides in the battle for the truth. As a result of these events, the FBI reopens the X-Files for the two, and it initially appears that the old days of investigating and debating the paranormal's credibility have returned. But shadowy forces are formulating a sinister plan that Mulder and Scully must stop quickly, because an unprecedented, toxic end could be what awaits every man, woman and child in America. 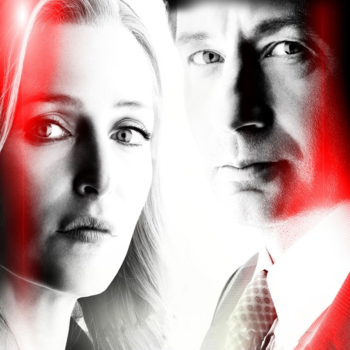 The truth is closer than ever.
"Had I come full circle to find the truth or only to uncover greater lies? Not one conspiracy, but two, that threatened not only Scully, but our son."
— Fox Mulder

Scully has seen the succumbing of America through a viral apocalypse, as well as the means to prevent this: by finding the son she gave away for adoption 17 years ago, William. Unfortunately, she and Mulder are not alone in their search. The Cigarette-Smoking Man and Monica are dead-set on murdering the boy and reinforcing their victory through their contagion possibly wiping out millions. And a new, splinter faction from the long-gone Syndicate stands against the two parties, intent on reaching the stars through the kid's unknown abilities. The race will drive home one harsh truth: each group may not like the answers they find.