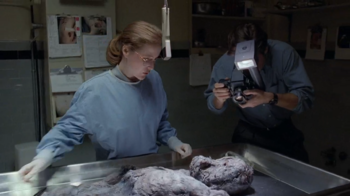 The namers of two of the most polarising tropes on this website.
Written by Chris Carter
Directed by Robert Mandel
Scully: I'm here to solve this case, Mulder, I want the truth.
Mulder: The truth? I think those kids have been abducted.
Scully: By who?
Mulder: By what.
Advertisement:

FBI Academy instructor Special Agent Dana Scully is re-assigned to work with (and debunk the work of) Fox "Spooky" Mulder, who focuses on the "X Files", FBI cases dealing with unexplained phenomena. Their first case together sends them to Bellevue, Oregon, where members of the local high school's Class of '89 have been dying young under suspicious circumstances, and the local authorities appear to be involved in a cover-up.