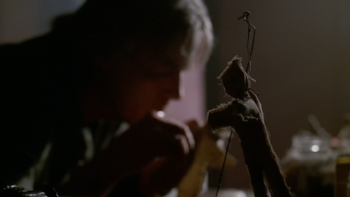 "'Theef'? Are you asking if my dad's a thief? He saves people's lives. He's a good man."
Written by Vince Gilligan, John Shiban & Frank Spotnitz
Directed by Kim Manners
"So... modern medicine, and all it encompasses - artificial hearts, laser surgery gene therapy, to name a few - all of that arrayed against a pile of magic dirt... and you tell me I'll lose."
— Dr. Robert Wieder
Advertisement:

"You do keep me guessing."