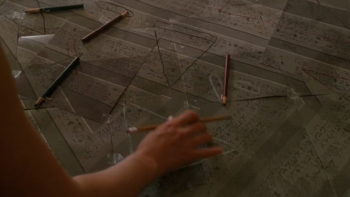 "It is the word of God."
Written by Chris Carter
Directed by Kim Manners
"Efforts to read the bottom of the craft have been harder. Our workers were scared away by phenomena I admit I can't explain - a sea of blood, a swarm of insects. But what little we have found has been staggering - passages from the Christian Bible, from pagan religions, from Ancient Sumeria... science and mysticism conjoined. But more than words, they are somehow imbued with power."
— Dana Scully
Advertisement:

Scully investigates an alien spacecraft being dug up in West Africa. Mulder continues to struggle with his alien-induced cognitive changes, with Skinner and Michael Kritschgau's assistance.