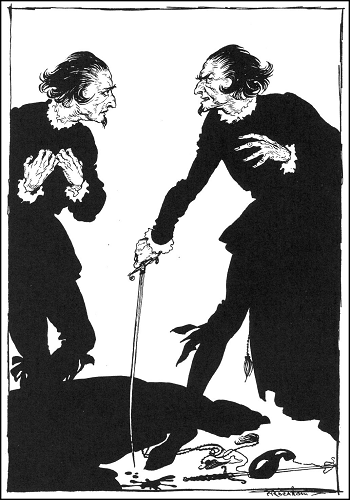 "Talk about being your own worst enemy."
— Lara Croft in Tomb Raider: Anniversary (after sending a mutant copy of herself into a lava pit)
Advertisement:

Doppelgänger, with an umlaut and a majuscule, is the German word for a ghostly double of a living person or more commonly simply a word for someone looking exactly like someone else, i.e. an impostor or double. It means "double (walker)", in the original. It is often said that one who sees their own Doppelgänger will die soon. In fiction, this is usually because they kill you themselves and take your place.

Traditionally, Doppelgängers have strange, supernatural origins, unlike twins which usually have more natural explanations. A Mirror Universe, Cloning, alien intervention, and magic are all possible sources of a Doppelgänger. For purposes of clarity, this index includes both mundane and supernatural impersonators of a character.

For twins related by blood, see Twin Tropes. See also Disguise Tropes. If a good character has an evil Doppelgänger, the Doppelgänger is an Evil Twin.

Specific types of Doppelgängers include: