Series / Made In Jersey 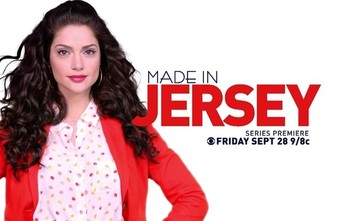 some caption text
Made in Jersey was a CBS primetime Law Procedural that premiered on September 28, 2012 on CBS. It follows the story of Martina Garetti (Janet Montgomery), a Plucky Girl from, you guessed it, New Jersey who—after working cases in Trenton—has now joined a prestigious law firm in Manhattan.
Advertisement:

Unlike virtually every other TV show that Hollywood and the New York media currently have on the air, this show actually depicts New Jerseyans as regular people rather than "Jersey Shore"-style caricatures, and depicts New Jersey as a blue-collar, salt-of-the-earth place full of working-class people who are just as sympathetic as the usual New Yorker characters. Also, Martina navigates through cases with a combination of legal knowledge and blue collar knowledge gained from her upbringing.

So, go figure that Made In Jersey was cancelled after only two episodes aired. Nine were completed and are available through some online outlets.