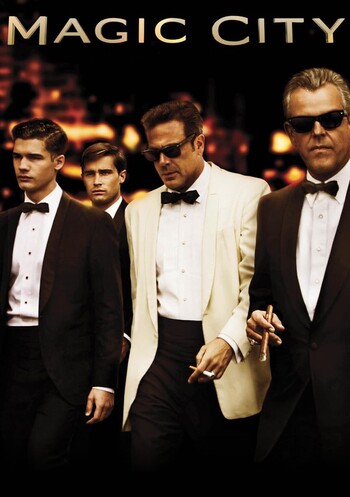 Magic City is an American drama television series that aired on the Starz network.

It is a period crime drama set in 1959 Miami. It focuses on hotelier Ike Evans (Jeffrey Dean Morgan), who owns the luxurious Miramar Playa Hotel, who is forced to make an ill-fated deal with Jewish mob boss Ben Diamond (Danny Huston) to ensure the success of his glitzy establishment. It also shows the relationships of Vera Evans (Olga Kurylenko), Ike's second wife and stepmother to his sons Stevie (Steven Strait), Ike's "bad boy" older son who manages the Miramar's Atlantis Lounge, and Danny (Christian Cooke), his straight-arrow younger son and a law school student; Lily Diamond (Jessica Marais), Ben Diamond's trophy wife who has a secret affair with Stevie; and Judi Silver (Elena Satine), a prostitute who works out of the Atlantis Lounge and as such does occasional jobs for Ike and Stevie.