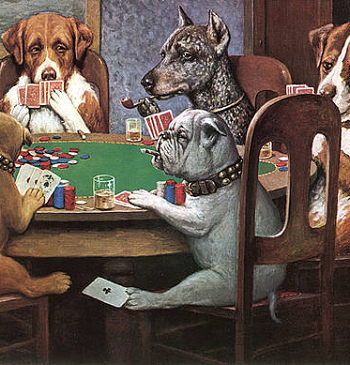 Every animal has within its brain a system that helps it figure out how the world works. Once you learn how to do something, it fires off dopamines that make you feel good. Even pigeons and rats have the ability to figure out "push button, get food".

Nevertheless, people have figured out as much as they can about gambling. The odds are very well known. One party's going to win, the other party's going to lose. Eventually. Face it, the casino wouldn't play the game if they weren't going to make money off of it. If you gamble, you're either lucky or a loser.

Some people Take a Third Option. They don't like to lose, and they don't like to gamble. If you cheat, you're not gambling and you're not losing. This is a trope that covers the many different ways people have found to not gamble. Supertrope to Two-Headed Coin. See also Throwing the Fight.