Film / Cabin in the Sky 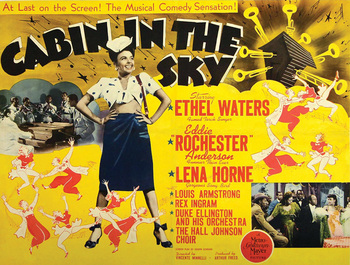 "There's a little cabin in the sky, Mister/For me and for you."
Cabin in the Sky (1943) is a MGM musical film based on the Broadway show of the same name. The story follows the life of Little Joe (Eddie "Rochester" Anderson), a gambler who’s trying to get right with God especially since his wife, Petunia (Ethel Waters), is so faithful and wants him to be good.
Advertisement:

However, temptation comes knocking and Little Joe gets shot. On his deathbed, Petunia prays so well that God is willing to save him from Lucifer Jr. and his devils who have come to reclaim his soul. Little Joe can live again for six months but he must be good or Lucifer Jr. will take him to the place down under. The only issue is that Little Joe won’t remember anything about this deal while he’s back to his human form.

The forces of good and evil fight for his soul, and evil comes in to the cute Georgia Brown (Lena Horne) whose sinful ways excite Little Joe. Petunia, on the other hand, misunderstands a conversation between Georgia and Little Joe, so she gives up on him, but can Little Joe still find the right path?

This was Vincente Minnelli’s directorial debut. Much like Stormy Weather, Cabin in the Sky featured a cast of the best African-American performers of its '40s era.