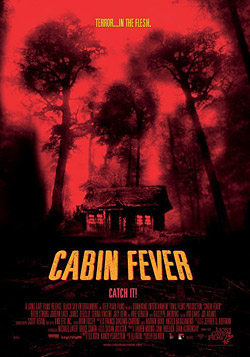 Cabin Fever is a 2002 American horror film directed by Eli Roth, about a group of college students who stay in a secluded cabin on a camping trip and subsequently find themselves falling victim to a flesh-eating virus (''Fever'', geddit?). Roth's directorial debut, the story was inspired by a trip to Iceland, during the course of which Roth developed a skin infection.

Inspired by many of his favorite horror films, such as Evil Dead, The Texas Chain Saw Massacre (1974), and The Last House on the Left, Roth wanted to step away from what he saw as the "watered down" studio horror films. Rather, he saw the violence and nudity as essential ingredients of what he saw as a throwback to 80's horror. Roth would later continue down this path with the Hostel series and The Green Inferno.

The 2016 Remake contains examples of:

Example of:
Do You Want to Copulate?