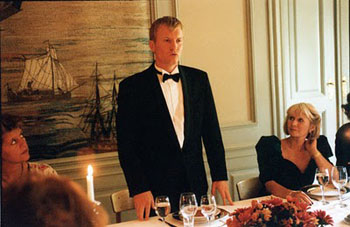 The Celebration (Festen) is a 1998 Danish movie directed by Thomas Vinterberg and was filmed according to the minimalist Dogme 95 guidelines.

Helge Klingenfeldt-Hansen, a respected businessman, gathers his family and friends for his 60th birthday. Amongst the guests are his wife Elsa and his three children Christian, Helene and Michael. Tensions are running high as the family is still recovering following the suicide of Christian's twin sister Linda.

As guests arrive one by one, the action moves into the dining room where the celebration is about to begin. And then Christian stands up and prepares to make a speech. However, he gives his father a choice. Does he want a yellow speech or a green speech? After being coaxed by his guests, Helge settles on the green speech, which Christian has dubbed the "honest speech." The guests have no idea what kind of dark family secrets are going to see the light of day as Christian begins his speech...

The Film Contains Examples Of: