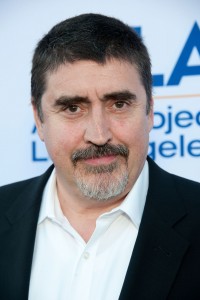 Alfredo "Alfred" Molina (born 24 May 1953 in Paddington, London) is an English-American character actor.

He began his career mostly typecast into "foreigner" roles due to his Spanish and Italian heritage. Nevertheless, Molina has carved out a career spanning more than four decades on stage and in film. His turn as Doctor Octopus in Spider-Man 2 was arguably his biggest mainstream breakout, so much so that he reprised the role seventeen years later in Spider-Man: No Way Home, but before that he had racked up a steady array of memorable performances: in Frida as legendary Mexican painter Diego Rivera, Boogie Nights as Rahad Jackson, Prick Up Your Ears as Kenneth Halliwell, Boris the Butcher in The Man Who Knew Too Little, Dudley Do-Right as Snidely Whiplash and even his debut film performance in Raiders of the Lost Ark as Satipo, Indy's treacherous assistant at the beginning.

He also has a distinguished theatre career, having played Tevye in the 2004 Broadway revival of Fiddler on the Roof and originating the role of the great abstract expressionist painter Mark Rothko in the play Red, among other things.

He also holds the record for most LEGO minifigures made out of a single actor, at seven (there are five different Lego figures for Dr. Octopusnote Though only one was intentionally made with his likeness, plus one for Satipo and one for Sheik Amar.)