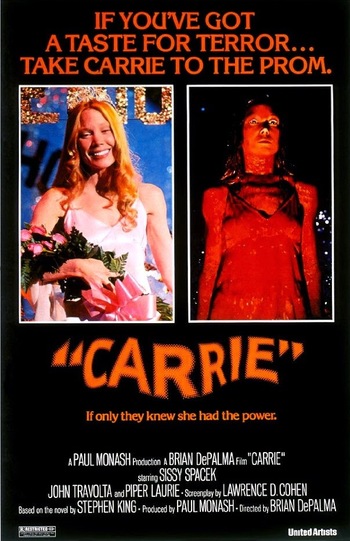 You will know her name.
"After the blood, comes the boys like sniffing dogs, grinning and slobbering and trying to find out where that smell comes from!"
— Margaret White
Advertisement:

Carrie (1976) is the first and best-known adaptation of the Stephen King novel Carrie. It was directed by Brian De Palma and stars Sissy Spacek, Piper Laurie, John Travolta, Amy Irving, and Nancy Allen.

High school can be rough, especially when you are the school outcast. Carrie White (Spacek) has spent her entire life as the town pariah, rejected by her peers and regularly abused by her fanatically religious mother, Margaret (Laurie). However, Carrie has a secret: she has telekinetic powers. When heartthrob Tommy (William Katt) invites Carrie to the school prom, her whole world will change for the better... and worse.

Received a direct sequel in 1999 in the form of The Rage: Carrie 2.

They're all gonna laugh at you!
Feedback

Example of:
Roaring Rampage of Revenge