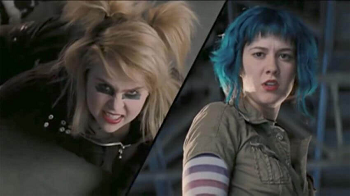 Oftentimes, a director or writer will have a scene in mind, say a dialog, or a big event, where there's two or more important points he wants to get across at the same time, but unfortunately, are happening in two different places, or at such an angle that you can't get both at once. One solution is to just alternate between showing the two, while another is simply to use a Split Screen to show both at the same time.

This way, you have your cake and eat it too: You can have your explosion and the reactions to it all in one shot, or you can see both sides of a telephone conversation. Alternatively, you can use it to show only loosely related events that happen to be going on at the same time.

It's also a very common device in multiplayer console video games, particularly first or third person shooters, allowing each player to get their own view. GoldenEye (1997) on the Nintendo 64 was one of the earlier and most successful implementations of this in a genre which, up to then, had relied mostly on linked systems for multiplayer.