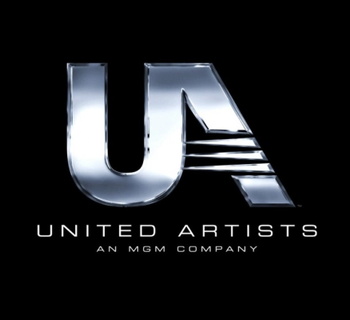 "United Artists was a very extraordinary organization, because once they had agreed on the director, they believed in letting him have his way."
— John Schlesinger
Advertisement:

United Artists is an American film studio founded in 1919. It stood out from the other Hollywood studios at the time for two reasons:

Things changed with the Fall of the Studio System in the 1950s. While the other studios suffered as a result of this (especially RKO Pictures and Metro-Goldwyn-Mayer), UA prospered. Their method of business — no high-overhead studio facilities, but instead a system that bankrolled outside production companies, giving creators freedom that no other studio would — was ideally suited for the post-studio era. In the 1960s, this paid off with the company with releasing more hits every year, especially with The Pink Panther and James Bond series, along with many a Spaghetti Western from Sergio Leone. Their tremendous success during this period, it should be said, was accomplished without any of the original owners. With Griffith dropping out in The Roaring '20s as his career floundered, and Fairbanks dying in 1939, only Chaplin and Pickford remained, and both sold their shares in UA to the new management they had hired in the mid-1950s. The studio went public in 1957.

During the 1950s and '60s, United Artists released seven films (Marty, Around the World in 80 Days, The Apartment, West Side Story, Tom Jones, In the Heat of the Night, and Midnight Cowboy) which won the Academy Award for Best Picture. Three of the victorious films were produced by the Mirisch Company, a firm owned by brothers Walter, Marvin and Harold Mirisch that became closely identified with UA through these and a number of other films, including the aforementioned The Pink Panther.

United Artists was successful enough to diversify during The '50s. In 1956, the company started a TV production division, most noted for such programs as The Outer Limits (1963), The Patty Duke Show, and The Rat Patrol. UA also launched United Artists Records in 1957; like other labels owned by film studios, it was initially an outlet for soundtrack albums, but evolved into a major name in the music industry.

In 1967, UA was purchased by the insurance company Transamerica, which sought to strengthen itself into a conglomerate in the vein of General Electric, RCA, or Gulf + Western (the latter of which bought Paramount that same year). This worked well for them, and soon nearly every major studio (save Disney, which remained independent) had been bought up by a larger company. Throughout The '70s, the James Bond and Pink Panther movies maintained their box-office popularity, and UA also did well with Woody Allen films, a film version of Broadway's Fiddler on the Roof, and the Rocky franchise (the first installment of which won the studio yet another Academy Award for Best Picture). In 1973, UA became the North American theatrical distributor for films produced by Metro-Goldwyn-Mayer.

Despite the long string of hits UA enjoyed during the 1970s, disputes between the studio's executives and those of Transamerica were quite common. UA's executives got into trouble with Transamerica's regarding the releases of such X-rated films as Midnight Cowboy (which had to be recut to achieve an R rating after winning Best Picture) and Last Tango in Paris. Jack Beckett, one of the Transamerica executives, had wanted to phase out the United Artists name completely, while UA executive Arthur Krim wanted the studio spun off as a separate entity; neither plan would come to fruition. Another UA executive, Eric Pleskow, was enraged when he found out that Transamerica wanted copies of each UA executive's medical records. The corporate infighting came to an end on January 13, 1978, when Pleskow, Krim, and other key United Artists executives decided to leave to form Orion Pictures. Their departures so alarmed many Hollywood figures that they took out an open-letter advertisement in Variety, warning Transamerica that it had made a fatal mistake in letting all of the UA executives go.

Initially, this had yet to be based on fact. Under new president Andy Albeck, UA had major successes in 1979 with such films as Rocky II, Woody Allen's Manhattan, the 007 installment Moonraker, and The Black Stallion.

But the final nail in the coffin for the idyllic lifestyle cultivated by UA for so long came in 1980, when UA distributed Heaven's Gate. It had a big budget, but ended up one of the most notorious creator-killing failures in history. So much that Transamerica's aforementioned ambition was dashed, and they were forced to sell the studio to Metro-Goldwyn-Mayer. Meanwhile, its record label was sold to EMI.

At first, MGM treated UA as an equal in the business, and in fact, several films were released under joint MGM/UA branding. However, they fell out of favor as ownership became unstable (resulting in the Giancarlo Parretti fiasco

that saw the company grind to a halt while he was busy embezzling from the company), and when MGM began getting their hands on other libraries left and right (The Cannon Group, Orion Pictures, the Polygram/Epic library, etc.). They then became more of an arthouse distributor.

A revival was attempted in 2006, when Tom Cruise and Paula Wagner joined forces to revitalize UA. Unfortunately, the comeback never materialized, due to a combination of MGM's financial problems and Paula Wagner's departure, and MGM reclaimed full ownership.

Like MGM, United Artists was reduced to little more than a production company, getting its films distributed by other entities. In 2014, United Artists was briefly relaunched as an indie label headed by Mark Burnett and Roma Downey (producers of The Bible (2013)) intended to handle multiple platforms such as film, television, and Christian media. However, it wasn't long before MGM bought the group wholesale, merging them into its TV unit and putting the UA name back into dormancy.

, in 2019 MGM and Annapurna Pictures announced that their joint distribution venture would be named as United Artists Releasing, giving the brand new life — and all on the company's 100th anniversary to boot. Their first release was the Stephen Merchant comedy Fighting with My Family.

On May 17, 2021, online retail and technology company Amazon entered negotiations to acquire MGM. The negotiations were made directly with MGM board chairman Kevin Ulrich, whose Anchorage Capital is a major MGM shareholder. On May 26, 2021, it was officially announced that the studio would be acquired by Amazon, subject to regulatory approval, for $8.45 billion, and continue to operate as a label under the new parent company with the fate of UAR to be determined. The merger was finalized on March 17, 2022. Later that day, Amazon Studios and Prime Video SVP Mike Hopkins emphasized that Amazon will continue to partner with UAR, which will remain in operation post-merger.

open/close all folders
United Artists as an independent studio (1919–1981)
An asterisk beside a pre-1968 film indicates that the film did not originally have a logo.
UA productions post merger with MGM (1982–2010)
Mirror Releasing and United Artists Releasing films (2018–)