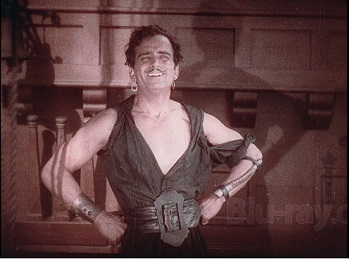 The Black Pirate is a 1926 Silent Movie starring Douglas Fairbanks. The film opens with a band of vicious, bloodthirsty pirates removing rings from the corpses of their victims. After plundering the ship they have just seized, the pirates then blow it up in order to kill all the witnesses. However, two people—Fairbanks's character and his father—survive the blast and make it to a nearby island. The father dies on the beach, and Fairbanks is marooned, but the pirates then make landfall on his island in order to bury their loot. Fairbanks, who both wants revenge and wants to get off the island, joins them, calling himself "The Black Pirate". His plan for revenge is complicated when the next ship that they seize is revealed to be carrying a beautiful lady (played by Billie Dove).

The Black Pirate was one of the biggest hits of Fairbanks's career, and one of the best of the several rousing action films he made during The Roaring '20s. Besides being a great movie, it has two claims to fame. First is the iconic Blade Brake scene, in which Fairbanks jumps from a ship's rigging to the deck by stabbing a knife in the sail and slicing his way down, establishing a trope that has been copied and parodied ever since.

Second, the film is in color. No, seriously, this is a Technicolor film from 1926. And it wasn't even the first; the first Technicolor film was called The Toll of the Sea and was made in 1922. The two-strip Technicolor process used in this film and other films in the 20s and early 30s was difficult and expensive, and rendered a soft palette of pastels that didn't pick up some colors very well (the blue of the sky looks washed out in several scenes). The result was a unique look that to some extent resembles the desaturated look of films like Saving Private Ryan.

What partially sets this movie apart from The Toll of the Sea is that this movie proved that movies could be in color. Fairbanks spent almost half the budget of the movie running tests on audiences and proving that color film wouldn't damage peoples eyes, or ruin the artistic value of film, which were very serious claims at the time.

Also, astoundingly for a film from this era, the blooper reel survives and can be seen on special editions of the film. Of note are the many, many takes of the famous blade brake scene and several fencing accidents due to the philosophy of film swordfighting used. (Fairbanks had learned from his previous films Robin Hood and Don Q Son Of Zorro that flashy swordfighting didn't look good and actual swordfighting also did not look good. Thus this film was approached by trying to meet the two in the middle, with real swordfighting that was still slow and flashy enough for the audience to follow.)