Film / What's the Matter with Helen? 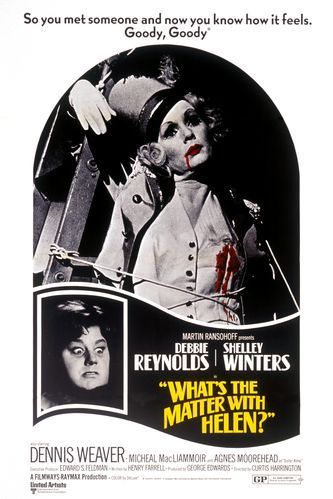 What's the Matter with Helen? is a 1971 horror thriller film directed by Curtis Harrington made to cash in on the growing trend of mentally unstable older women horror stories ("psycho-biddies") — usually starring a now-aged leading lady from The Golden Age of Hollywood. This film's candidate is Shelley Winters, co-starring alongside Debbie Reynolds.

The plot concerns two women in the 1930s - ambitious Adelle Bruckner (Reynolds) and mild-mannered Helen Hill (Winters). Their sons have just been convicted for the murder of another woman. The two decide to flee the gossip, change their names and start over. Adelle opens a dance school for wannabe child actresses in Hollywood, where Helen plays the piano. At first everything seems to be going great; plenty of students, lots of exposure, and Adelle even makes a love connection. But then of course we find out what's really the matter with Helen.