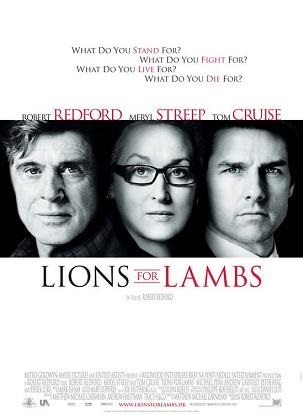 Lions for Lambs is a 2007 American drama war film directed by Robert Redford and starring Redford, Tom Cruise, and Meryl Streep. It was the first Cruise/Wagner Productions film since the company joined with United Artists subsequent to Cruise having a falling out with Paramount in 2006.

The plot is about three interconnected stories: The first story is about Dr. Stephen Malley (Redford) attempts to reach talented and privileged, but disaffected, student Todd Hayes (Andrew Garfield). Hayes is naturally bright, comes from a privileged background, but has apparently slipped into apathy upon being disillusioned at the present state of affairs; now, he devotes most of his time to extra-curricular activities like his role as president of his fraternity. Malley tests him by offering a choice between a respectable grade of 'B' in the class with no additional work required or a final opportunity to re-engage with the material of the class and "do something." Before Todd makes his choice, he must listen to the second story: Dr. Malley's story of his former students Arian (Derek Luke) and Ernest (Michael Peña) and why they enlisted in the army to fight in Afghanistan after graduating from college.

For the third story: Meanwhile, in Washington, D.C., a charismatic Republican presidential hopeful, Senator Jasper Irving (Cruise), has invited TV journalist Janine Roth (Streep) to his office to announce a new war strategy in Afghanistan, hoping that Roth's positive coverage will help convince the public that the plan is sound. Roth has her doubts and fears she is being asked to become an instrument of government propaganda.