Film / History Is Made at Night 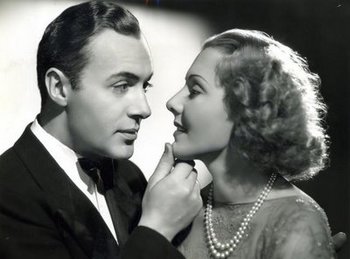 The star-crossed, genre-crossed lovers of the story.
Advertisement:

History Is Made at Night (1937) is a romantic melodrama directed by Frank Borzage, starring Jean Arthur and Charles Boyer.

Irene Vail (Arthur) wants to divorce her horribly jealous husband, Bruce (Colin Clive). He, however, will stop at anything to stop her divorce proceedings, so he conjures a plan to have someone forcibly enter her hotel room then conveniently have his detective find them in a compromising situation. On a chance overhearing of this nefarious plan, Paul Dumond (Boyer), decides to save Irene by posing as a thief and kidnapper. He and Irene escape, and she learns that he’s no robber at all, but her saviour. They spend a romantic evening in the restaurant where Paul is headwaiter and fall in love. But their love is endangered once Bruce catches whiff of their plan to be together.

History Is Made at Night shows the following tropes: