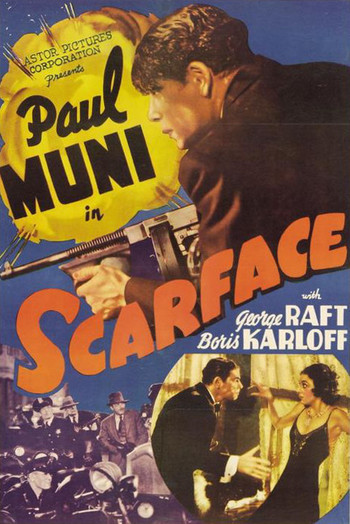 The shame of a nation.
"Some little typewriter, huh? I'm gonna write my name all over this town with it, in big letters!"
— Tony Camonte, while pointing at his tommy gunnote , referencing one of the gun's nicknames, the Chicago Typewriter
Advertisement:

The original 1932 gangster film by Howard Hawks, written by screenwriter Ben Hecht and produced by eccentric millionaire Howard Hughes (also producer and director of Hell's Angels). It was loosely based on the life of Al Capone. The film stars Paul Muni, George Raft and Boris Karloff in a character part as an Irish gangster.

Scarface is the tale of Antonio "Tony" Camonte (Paul Muni). Tony kills Big Louis Castillo, the crime boss of Chicago's South Side, and takes his place, also taking control of a thriving bootlegging business. Tony's Mafia boss, Johnny Lovo, tells him not to interfere with the Irish mob on the North Side, but Tony ignores him, and Johnny realizes that Tony is a threat to his position. Tony defeats the Irish mob and takes over the North Side, survives a hit put out by Lovo, and then kills Lovo, thus becoming the boss of all Chicago. Eventually the police close in, and Tony is killed in a hail of bullets.

Scarface ran into a lot of problems with the Hays office. Censors tried to force an alternate ending in which Tony voluntarily surrenders and is eventually executed. This led to the addition of two scenes, one where bankers denounce and condemn Tony Camonte for his crimes which includes a token rich Italian-American noting that Camonte is giving Italian Americans a bad name and setting a bad example. The other was the alternate ending used in theatres in the South. Neither of these scenes were shot by director Howard Hawks. However, the film was released during the The Pre-Code Era and as such widespread industry self-censorship was not in full effect so the film did come out more or less as Hawks intended and was regarded as a real shocker and cited for causing Moral Panic. The original film, much like the remake, set up a controversy for depiction of violence and glorifying gangsters since the film tended to make Tony Camonte a Byronic Hero and indeed screenwriter Ben Hecht stated he modelled the dynamic between Camonte and his sister Cesca on Cesare and Lucrezia Borgia from Renaissance Italy.

The film was a major box-office hit around the world and became an iconic gangster film and it became the Trope Maker and Trope Codifier for the Depression gangster film. Bertolt Brecht's play The Resistible Rise of Arturo Ui borrowed from it extensively. However, the film became a victim of its controversy and success. When The Hays Code went into effect, all films released before had to be re-submitted for censorship to continue screenings in repertory cinemas. Scarface was considered so difficult, even in censored and bowdlerized versions, that it was shelved and banned from American screens until the late 70s!!! To see the film in America you had to go to private collectors or in other out of the way places. And it was easier to see in France, in the Cinematheque Francaise of the same period where it was a major favorite. Its rediscovery in America in the 70s made it a cult favorite again and this actually inspired calls for the 1983 remake that would overshadow it for the new generation.

This film, along with The Public Enemy and Little Caesar, popularized the gangster genre in The '30s. Scarface has a place on the National Film Registry.

Not to be confused with the other Scarface flick, the one that was released five decades hence.

The original 1932 film contains examples of the following tropes: