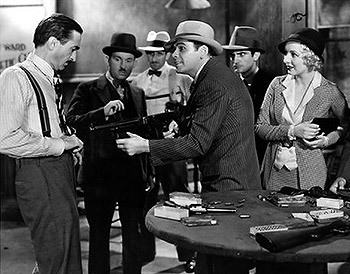 Say hello to his little friend!
"Who is to say we should obey the laws they make for their own interest and to our hurt? And who are they then to meddle when we look after our own interests? Sonna cosa nostra, these are our own affairs. We will manage our world for ourselves because this is our world, cosa nostra."
— Don Corleone, The Godfather
Advertisement:

Hard-nosed, gun-toting, take-no-prisoner Italians (and the ethno-linguistically separate Sicilians, but it's rare for gangster-centric media to make such a distinction). Part tight-knit community, part protection racket, these paesani live by a code — which just happens to include vendetta (killing anyone who wrongs La Famiglia) and omertà (going to your Don, rather than the cops, when you have trouble with a fellow Italian or Sicilian). Classically known as Cosa Nostra ("our thing") for the Sicilians, and also called "wiseguys". Although the power of the Mafia (at least, the American Mafia) has diminished sharply since such heights as the Prohibition Era thanks to most of its bigger players either getting stuffed into prison or simply becoming too old to participate in the game, the mystique surrounding these organizations is so strong that they have almost replaced other established historical figures, such as knights or cowboys, as carriers of a romantic ideal.

While the Italian Mafia has an obvious basis in fact, it has remained a staple of entertainment even as the Japanese Yakuza, former Soviet-bloc Bratvas and Latin American drug cartels lapped it for sheer scare value in the real world (they may or may not share some of the Mafia's traditional features in fiction, such as the sharp suits or the loyalty to family). Note that this trope can also include similar Italian criminal organizations such as the Neapolitan Camorra or the Calabrian Ndrangheta which are also fairly prominent at home and overseas just like the Mafia. For the laughably inept, PG-rated version, see The Family for the Whole Family. If present as a global player, the Mafia may evolve into The Syndicate. See also Mafia Princess and The Don. It is obviously not connected with the Legitimate Businessmen's Social Club at all.

Compare The Mafiya, The Cartel, The Triads and the Tongs, Yakuza, The Irish Mob, London Gangster, the Kosher Nostra (which the Mafia sometimes employs), Gangbangers (who often fill the same role, but fit into a different archetype), White Gangbangers, The Yardies, and Generic Ethnic Crime Gang. For more information about the real organizations, see the Useful Notes page, The Mafia.

A Drama Out of a Crisis

The Mafia advertises its insurance services.

A Drama Out of a Crisis

The Mafia advertises its insurance services.