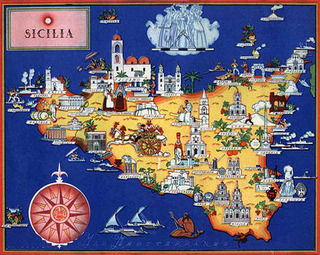 Kay: This is dangerous for you. This is Sicily.
Michael: I love this country.
Kay: Why?
Michael: Well, all through history, terrible things have happened to these people. Terrible injustices. But they still expect good, rather than bad, will happen to them.
— The Godfather Part III
Advertisement:

If Italy is a boot, then Sicily is the football. It gets tossed back and forth between various great powers, and get screwed over left, right, and center. Its position in the exact middle of the Mediterrean (between Europe and Africa, and between Western and Eastern Europe) has led the island to be conquered quite often by foreign powers. It is the largest island of the Mediterranean, home of Mount Etna, and the site of 7 UNESCO World Heritage sites and it is an autonomous region of Republican Italy (one of five to enjoy said status).

The island of Sicily has its own language and its own culture, like every other region in Italy but Sicilians take it up to eleven with its regionalism. The island of Sicily after all has joined Italy just 150 years ago, and for most of its history had been regarded as barely part of the peninsula. Since the 8th century BCEnote And even before, as there are archaelogical evidences that can trace the interactions between Sicily and mainland Greece back to the Bronze Age Sicily has been melting pot of native tribesmen, Greeks, Carthaginians, Romans, Germanic tribes (Goths, Vandals), Arabs, Norse-French Normans, and then Spaniards. Sicily has a history unlike any other place in the world, being simultaneously on the margins of great powers but also absolutely at the center of any shift in the Balance of Power in the Mediterranean. It's just not possible to understand a huge significant part of European history without understanding how the island fit into it, and taking into account its immense strategic importance. On account of its geographical position at the "neck" of the hourglass-shaped Mediterranean Sea, it has frequently been the center of war and power struggles among different powers. Many of the key incidents in the history of Ancient World have taken place in Sicily.

At the beginning of its history, Greek settlers founded several cities on the eastern coast (and some of them still exist in modern times, making them among the oldest cities in Europe) that grew and prospered. The most important city was Syracuse, which would retain this position until the Middle Ages, when its importance declined in favor of its current capital, Palermo. These Greek city-states were at times ruled by tyrants and were often at war with the remaining native tribes and the Carthaginian settlers in the Western half of the island. Sicily was then the centre of the disastrous Sicilian Expedition in The Peloponnesian War, that eventually played a major part in the end of the Delian League, and Alicibiades' poor management and defection to Sparta was invoked as justification to execute Socrates, who was Alcibiades' mentor.

The Roman Republic's interference in the affairs of Sicily led to the Punic Wars. During the Second Punic War, Sicily, which largely backed Hannibal faced a siege and invasion by the Romans. The city-state of Syracuse was the home of the great scientist Archimedes, who was subsequently killed by a Roman legionnaire, despite orders to spare him. Sicilians under Rome often gave hell to the Republic. It was the site of two slave revolts, the first and second Servile Wars (overshadowed by the Third Servile War on account of Spartacus). The first one was led by Eunus, who claimed to be a Prophet, and the second one was led by a man named Salvius, who took the name Typhoon. Cicero made his political debut by denouncing the abuses of the corrupt Roman governor of Sicily, Verres. After Julius Caesar was assassinated, the Assassins and their supporters waged a civil war, and even after Brutus and Co. died in Philippi Greece, an independent non-Roman state based in Sicily held out against the Second Triumvirate. It was led by Sextus Pompey (son of Pompey the Great) and it led to Augustus launching a major amphibian campaign to take it down. Under Sextus Pompey, Sicily was a Roman province, and this was more or the last time Sicily would ever be independent of Rome until the end of the Western Roman Empire.

Sicily was the first province of the Roman Empire, and that should mark that Sicily at the time was not seen as part of the Italian peninsula at all. After all, the island was culturally and ethnically Greek, and could not be Romanized easily as it happened in mainland Italy. So the Romans installed their administration and settlers came in, but the island largely retained its Greek character and influence—although the Greek language was replaced by Latin in relatively short order, with Vulgar Latin becoming the mother tongue of the common people.

After Rome fell, Italy once again became divided into multiple warring states, but because of its riches and prestige, every aspiring great power wanted a part of it. And do you know, which is the island that serves as the nice landing area for an amphibian invasion of The Boot? The answer was obvious to Flavius Belisarius who conquered it first for Justinian I's campaign to retake Italy, and he used that as a base. Later during the rise of the Islamic caliphates, they took over and settled on the island, getting rid of the Byzantines on the island before being in turn removed by the Normans who established the Kingdom of Sicily under Roger II of the Hauteville dynasty. This was a major spark that led to The Crusades, since both The Pope and the Byzantine Empire were unhappy about a new great power in the Mediterranean.

Norman Sicily was something of a marvel in Medieval Europe, especially under Roger II. Because it had been a battleground between Muslims, Greeks and Lombards, there were significant populations of each, this along with Sicily's position smack dab in the middle of every major Mediterranean trade route gave it a distinctly cosmopolitan flavour. The Hautevilles encouraged this inviting Greek, Muslim and Latin scholars to their court and commissioning Latin translations of many Greek and Arab Texts (Some of which were themselves translations from the original Greek) into Latin. This has left a massive Greek and Arab influence on the Sicilian tongue, enough that many linguists consider it to be a separate language from Italian rather than a dialect.

Eventually Norman Sicily fell to the House of Hohenstaufen of the Holy Roman Empire and the island became part of the Guelph-Ghibelline conflict. For a time the Kingdom of Sicily became divided between the island proper, which belonged to the King of Aragon, and the mainland Kingdom of Naples, ruled by the Angevin branch of the French Capetians, though both were, confusingly, still officially known as the Kingdom of Sicily. Even when the Spanish managed to conquer Naples, they would not be officially reunited until after The Napoleonic Wars, when they were merged into The Kingdom of the Two Sicilies.

The Risorgimento, the Reunification of Italy, began with the Landing of Garibaldi's Thousand. At the end of the Reunification, the consequences of more than two thousand years of back-and-forth conquests came to the forefront. The Kingdoms and their aristocrats before the Republic had kept in place structures that while not helpful to the people, and indeed kept them impoverished at least provided them protection. The new Italian state, annulled all of that, leading to a crisis and breakdown whereby it was everyone for themselves. Land was bought and sold to middle-class speculators, and little in the way of compensation was given to the people. Naturally the people felt they had to protect themselves. And in this situation, The Mafia came into existence.

The situation in Sicily led to massive emigration to other countries, most notably to America, where they had a profound effect on American culture (particularly its cuisine), though frequently hybridized with other (mostly Southern) Italian groups (especially Neapolitans/Campaniansnote Who came in similarly large numbers for similar reasons, though replace "Mafia" with "Camorra."). While most Sicilian immigrants were hard-working citizens, proud immigrant families and key parts of the working-class movements of the 19th and 20th Century, some of them were gangsters, and through them, the Sicilian Mafia became involved in American organized crime. The Mafia paradoxically became a holdout for opposition against Mussolini's Fascist Italy who sent a special prefect to suppress them.

During World War II, the Allies like Alcibiades, Belisarius, the Arabs, Normans and Garibaldi before them, sought Sicily as a key naval base to take over the rest of Italy and topple Mussolini. Under Allied occupation, the Mafia returned to Sicily and while their power and influence waned in the New World, and withered slowly in Italy, the are still there as a significant presence, with their secret client-patronage networks punching far above its weight. High profile assassinations of prominent politicians continued in the post-war era. Sicily has historically been close to the centre of gravity but often at the expense of the Sicilian people. The constant foreign influx into the island nation has left its mark on regional politics, leaving a mess of grudges and feuds between villagers and classes who feel one or the other, at various times, someone or the other has profited under some earlier foreigner or the other, leading itself to a vendetta culture that the Sicilians themselves seem to take a perverse pleasure in, at least in the eyes of notable Sicilian writers like Giovanni Verga, Giuseppe Tomasi di Lampedusa and Luigi Pirandello.

As represented in fiction: