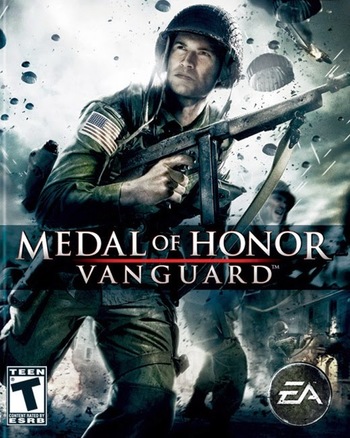 I do not believe in the Airborne Division... - General Dwight D. Eisenhower
Corporal Frank Keegan: They call us the All Americans. The 82nd Division had been around since World War One. That was the first time we went to Europe and kicked the Hun back across the Rhine. But it wasn't until the bombs dropped on Pearl Harbour, and Hitler and the Nazis declared war on the United States that this new conflict got big enough to be thought of as a 'Second World War'. That's the first time someone mentioned that the 82nd Division might become Airborne. They lined us up, asked for volunteers... For an extra 50 bucks a month we'd be a part of a great American experiment in warfare. We'd jump out of aeroplanes into combat. We'd be the first. The Vanguard. We shipped off for Georgia for training, then England, then Operation Torch in Africa, where we got shot at by a bunch of French who seemed to think working with Hitler was a good idea. Then, one day, the brass came out of the briefing tent, and gathered their leaders. Then the Captains and Sergeants got their guys. Within 15 minutes, word had reached every soldier in camp. This was it, Operation Husky. The Americans were fighting Hitler's own, and we were going in first.
- Introduction of ''Operation Husky''
Advertisement:

Medal Of Honor: Vanguard is the 10th instalment of the Medal of Honor series and released in 2007 for the Playstation 2, and Nintendo Wii.

In this game, you play as Corporal (later Sergeant) Frank Keegan, an American paratrooper from the 82nd Airborne Division during World War Two, who fights in Operation Husky, Neptune and Market Garden, before being transferred to the 17th Division to fight in Operation Varsity, along with his Squad, led by Sergeant Magnusson and his Platoon, led by Lieutenant McCollum. Keegan and his squad are tasked with fighting the Axis powers in Europe by parachuting into combat.

Vanguard also allows the player to control their parachute at the start of each Operation, allowing them to control where they start as well as giving the player the ability to upgrade two of their weapons, the M1 Garand and M1928A1 Thompson. These systems would be reused and expanded on in the nearly-concurrent Medal of Honor: Airborne, which uses the same system of parachute drops into each mission and allows every weapon - even enemy ones - to be upgraded with regular use.