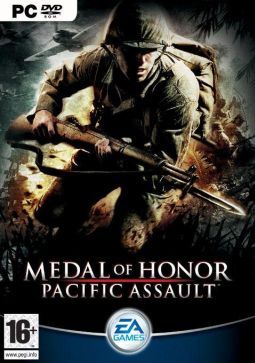 One Island At A Time.
Conlin: "For more than two centuries, the United States Marine Corps has fought for freedom. But their infamy, their legend, was forged during the hell of World War II. Triumph cannot exist without hardship. The price of victory is paid in the blood of men. Faith, courage, and sacrifice paved their road. And that long journey began in the early hours of December 7th, 1941..."
— Opening to Pearl Harbor
Advertisement:

Medal of Honor: Pacific Assault is the 7th entry in the Medal of Honor series. It was released for Microsoft Windows on November 4, 2004.

Like Medal of Honor: Rising Sun, this game is set in the Pacific Theater of World War II. And like that game, the player plays as a US Marine fighting against the forces of the Imperial Japanese Army and Navy. In this case, you play as Corporal Thomas Conlin, a Marine fighting in the Battle of Tarawa. Unlike the former though, this one attempts a more realistic plot and focuses solely on the United States Marine Corps from start to finish. As a result, it has none of the Stealth-Based Mission elements of previous Medal of Honor titles, nor is The Protagonist of this game a member of the OSS Trapped Behind Enemy Lines.

Conlin starts off during the first day of the Battle of Tarawa and gets seriously wounded just after landing on the island. We then cut back to when he first starts off as a Marine recruit training in boot camp, along with the other members of his squad. From there, he is later assigned to the Marine Detachment of the battleship USS Arizona. As luck would have it, Tommy arrives at Pearl Harbor to join his new unit on December 7th, 1941 and witnesses the Japanese attack firsthand. He almost manages to reach Arizona before she is destroyed, then boards another battleship, West Virginia, instead, helping with damage control and manning an antiaircraft gun. Following this, he decides to take specialized training and becomes a Marine Raider, an elite fighting force tasked with conducting raids behind enemy lines. It is here that he gets reunited with his old squad from basic training, and from there, they are assigned to raid Makin Atoll, their first combat assignment.