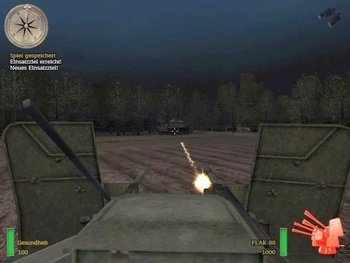 Notice how there's no loaders or spotters? This is just the tip of the iceberg...note The Player Character in a later level here manages to operate a tank without the need of additional crew members.
Blackadder: I was under the impression that it was common maritime practice for a ship to have a crew.
Redbeard Rum: Opinion is divided on the subject. Yerrs; all the other captains say it is, I say it isn't!
— Blackadder
Advertisement:

Several kinds of vehicles are so complex and require such multitasking that they cannot be operated by a single person: tanks, trains, certain airplanes, etc.

Take the typical tank, for example. If you're in the driver's seat, you have limited visibility and you can't load or fire the main gun. If you're in the commanders seat, you can see all around you, but you can't drive, shoot or load the gun. If you're in the loader's seat, you can't see well or drive (you might not even be able to shoot the main gun). The training points out the fact blatantly: The Captain has to sit, look around and give orders, each crewman has a single task to perform and has to do it at his best, this is why absolute trust in your buddies is the most important thing you have to learn in the military.

However, this doesn't seem to be a problem in Fictionland. The Hero (usually a Universal Driver's License holder) can easily handle any such vehicle singlehandedly. Common in certain movies and video games (though in the latter case it could be considered an acceptable break from reality)

Almost universal in the case of Humongous Mecha, the notable exceptions being Combiners.

This can be justified in certain Speculative Fiction settings by omnipresent computers and simple AI. One might say the ideal number of people for any given vehicle is one: one human to handle the tactics and the moral decisions, and computers to handle the rest of the more mechanical tasks like navigation. The limiting factors, of course, are the amount of multitasking still left to the pilot, and how long the pilot can function at that level.

It can also be justified in emergency situations, at least in aviation. In the case of the death or incapacitation of one member of the flight crew, for instance, the other pilot is always able to fly the aircraft. In fact, it's a requirement that all aircraft be flyable by a single pilot for this very reason. And it's not that rare a circumstance; dozens of pilots have died during flight.note Note that just because one person can fly a plane, that doesn't necessarily mean they can do all the auxiliary functions at the same time as well. Many aircraft need at least one crew member who isn't focused on actually flying the thing to allow it to fulfill its designated role. Modern diesel-electric and turbo-electric ships are often similarly capable of being controlled by a single crew member in extremis.

Compare Guy in Back and how they are often treated in video games, as well as Critical Staffing Shortage. Related to The Main Characters Do Everything, especially One-Man Army.

open/close all folders
Naval Vehicles
Tanks
In games, tanks and other AFVs are by far the outstanding demonstrator of this trope; more often than not, a single person will be able to drive, aim, and fire the main weapons of an armored vehicle on their own. Games which involve having multiple players operating one vehicle will usually have one player driving and any others operating the vehicle's weapons systems, but even then this will typically take the form of the first player/driver controlling the movement and aiming/firing the main gun, while the second player will simply take control of a mounted machine gun on the top. It is also very rare to get a real first-person view inside the tank, usually to avoid showing the crew working but also because this is usually not conducive to gameplay. The rest is a Rule of Fun issue; it's rather hard to get people excited about getting to be a tank's loader or radio operator. And in games that don't involve multiplayer co-op, this is the only way to make tanks playable at all. Even if the tank in question has fully automated loading of its main gun (most don't), every tank that has a turret has the driver seated in a separate compartment with no ability to control the weapons, and everybody in the turret likewise has no ability to drive the tank.
Spaceships
Other