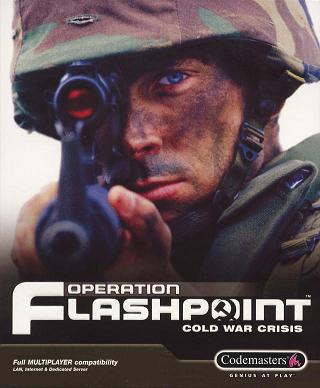 Released in 2001, Operation Flashpoint: Cold War Crisis is a Tactical Shooter/Soldier Sim that was quite revolutionary for its time, earning critical acclaim for its innovative open world gameplay and consistent focus on realism (so much so that the engine was even adapted for real militaries to use as a training simulator

). OFP let players roam on massive islands tens of square kilometers in size and use a wide variety of vehicles however they see fit, and all this at a time when most FPS games limited the player to oppressive indoor settings and small outdoor arena-style maps, and typically only featured usable vehicles in on-rails shooting sequences, if at all.

Being the first ever game of Czech developer Bohemia Interactive Studios, OFP was a bit rough around the edges graphically and had more than its fair share of bugs, but its gameplay innovations and the sheer scope of the game won it favor with gamers and critics. Two expansion packs and an XBOX semi-remake later, its developer Bohemia Interactive Studio and publisher Codemasters split ways; BIS took the rights to the engine, Codemasters got the rights to the name. BIS has since released three Numbered Sequels based on further developments of this engine, called ARMA (short for Armed Assault), while Codemasters developed its own "official" sequels, Dragon Rising and Red River. Essentially, the BIS sequels closely resemble the original, except they have much better graphics and improved gameplay, while OFP: DR and RR feel, well, different from the original OFP, and a lot of old veterans seem to think that it suffers from New and Improved Syndrome.

Works within this series:

Not to be confused with the Canadian series Flashpoint.

The Operation Flashpoint series provides examples of the following tropes: