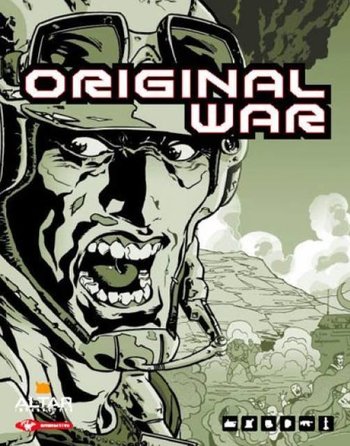 Original War is a Czech Real-Time Strategy game that was released in 2001 as a budget title. It is noted for including RPG Elements, a resource system built around scarcity and a very high difficulty. Being an obscure game overall, it has achieved cult status since its release. The story is loosely based on the 1981 novel The last day of Creation by German author Wolfgang Jeschke.
Advertisement:

The titular war revolves around a rare mineral called Siberite. Originally found in Siberia, it is discovered by the US military during the allied intervention in the Russian Civil War in the 1920s, along with an alien artifact, EON. The artefact and a small amount of Siberite is smuggled out of Russia, and experiments eventually determine that Siberite is both a catalyst for cold fusion and fuel for EON — which is revealed to be a Time Machine. With no safe way to acquire the priceless Siberite from the Russians, another approach is decided upon: to send a task force back in time 2 million years on a one-way mission to mine and transport the Siberite over the then-intact land bridge between Alaska and Siberia. Upon arriving, however, the task force members are scattered in both time and space, and much to their surprise find themselves beset by hostile Russians.

"Meanwhile", in the present day, the Soviet Union is fuming over America's monopoly of Alaskite, a mineral with strange properties first discovered in Alaska. During an excavation in Siberia, however, trace amounts of Alaskite is found buried with what is determined to be 2 million year old modern American technology along with an alien device dubbed TAWAR. Experiments determine that TAWAR is a Time Machine capable of sending objects back in time 2 million years — leading to the realization that the US stole the Alaskite deposit to begin with. The Russians, enraged, determine to take back what is rightfully theirs, and thus send their own force through the TAWAR to stop the Americans.

Back in the American present, partway through the process of sending supplies and manpower back in time the facility housing EON is abruptly attacked by a force of Arab mercenaries. The Arabs steal through the EON with their own group and supplies and arrive in the middle of the on-going hostilities. Confusingly, many of them do not seem to care about the agenda they were sent to carry out and instead sell their services to the first bidder. Secretive and reclusive otherwise, only time will tell what the Arabs truly intend.