Mucking in the Mud 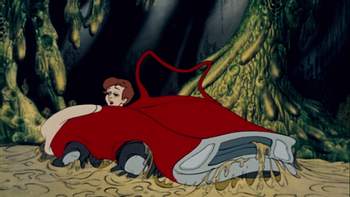 This is a common subtrope of Geo Effects, where boggy or swampy areas drastically impede your movement. So long as you remain in here, you'll move at a snail's pace, vulnerable to passing enemies. Your jumping, if applicable, may or may not be affected by this, and in fact, you may be able to move quickly by repeatedly jumping in and out of the bog.
Advertisement:

In some cases the bog may actually be hazardous to your health, dealing damage over time, acting like quicksand and swallowing you whole if you spend too long within, or applying some unpleasant Status Effects.

For some reason, you're never able to simply walk around the hazardous terrain, as the area is almost uniformly flooded like this. Any safer paths will almost certainly be blocked off with fallen logs, impassible treelines, and so on. However, some mudpits look hazardous, but are actually safe enough to cross...

Not to be confused with Bubblegloop Swamp or Quicksand Sucks.